SHEFFIELD, Illinois – A 100-year-old historical site could be a source of new money for the Quad Cities. Friends of the Hennepin Canal envision boats being able to transport tourists up and down a 50 mile stretch of the canal between Geneseo and Rock Falls. There are three locks along this section that need repair but Cathy Foes, member of the Friends of the Hennepin Canal, said they are 95% in tact. “An estimate we’ve been given, just a pie in the sky, $300,000. So you’re only talking three canals. It’s only $900,000.”

The Friends hope to attract fishing boaters and canoers to the canal as well as having RV Boats. These RV Boats, which would be purchased by an entrepreneur or community, will be about seven feet tall and wide and 30 feet long. This size boat will fit through the tunnels which are 12 feet in diameter. “Europe in the 80s spent a lot of money restoring their canals,” explains Foes. “It’s been an economic boom for them. It could be an economic boom for our community.”

The Hennepin Canal was to be a 400 mile shortcut to the Mississippi River. It was used to transport salt but never was used to its fullest commercial potential. With help from public, state and federal funds, this canal could be a money maker. Last year, former Illinois Governor Rod Blagojevich tried to close part of the canal because of budget cuts. The Friends rounded up more than 5000 signatures to stop it. 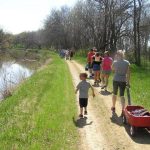