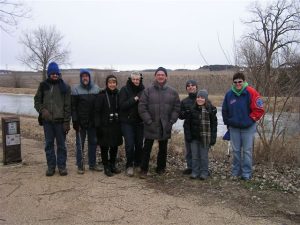 Brrrrr!  An artic blast moved in over night but we still had 8 for our hike. Joining our group for the first time were Paul and Lindsay Anderson from Sterling.  Completing our crew were Carol Hubbs, Joyce Hockstatter, Wayne Leader, Kim Jalley, Craig Arbet, and Ed Herrmann.  We moved today, just stopping at a few spots to pick up garbage.  The wind from the night before left a tree and a lot of small branches on the trail.  I was told we have a large group of fur trappers along the canal.  We noticed ribbons marking their trapping areas on the opposite bank.  Unexpected as we finished the hike – a dead car battery.  Lucky for us we flagged down Carol before she left.  Wayne had a set of jumper cables and got his vehicle running. 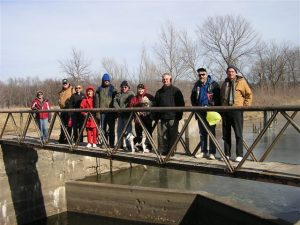 Several changes took place in the past year.  The bike path had been resurfaced in areas, center lines added, and the path had been expanded east of Lock 30.  Quite a few eagles were spotted in the trees and a few photographers with their telephoto equipped cameras lurked below.  A strong southeast wind keep many of the locals away even though it was a sunny day and the 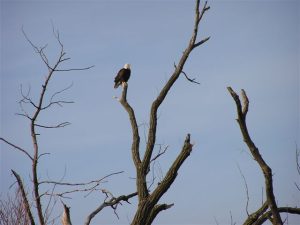 temperature just above freezing.  That wind prompted us to abandon the bike path and detour to the lower river trail. Several years ago we took the lower trail after a heavy snowfall, it was easier going in the snowmobile tracks.  Mistake this year!  The river trail was littered with fallen trees. 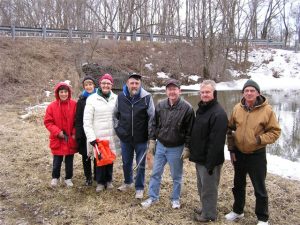 Hiking today were Phil St. John , Wayne Leader, Janice Dzierzynski, Carol Hubbs, Joyce Hockstatter, John Elston, and Ed Herrmann.  Nippy today, temperature at about 32, a northeast wind blowing at us for the first 2 ½ miles.  Less wind as we headed north to the guard lock but we noticed snow and icy patches now on the path.  Yes, we did have a few slips on the ice. 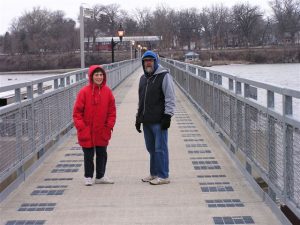 Wayne, Janice, Carol and I fell behind the lead group.  Stopping to pick up garbage the cause.  We were able to unload as there was a trash can at bridge 45.  Everything we picked up after that went home with us, no trash can at the lock.  Even though it was late, Wayne, Janice and I took an extra walk on the Sinnissippi Dam Walkway, the walkway links Rock Falls with Sterling.  A must walk if you are in the area! 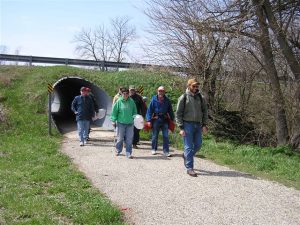 Jalley, Craig Arbet, and Ed Herrmann completed our hikers.  Hang onto your hats, we had to buck a strong wind for most of the hike.  We met no other hikers or cyclist on the trail today.  We had no problem filling our garbage sacks today.  We didn‘t expect to pick up so much.   It was tiring with the wind and toting the bags of litter. Spotting the I-80 bridge over the canal was a welcome sight, the parking lot was near! 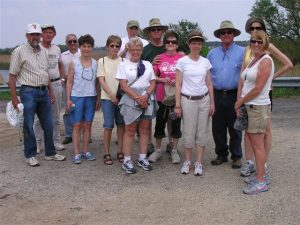 Joining our group for the first time were Jim & Nancy Carlson and Bill Green from Princeton, Alice Horrie, Christi DeSmit, and Deb Lindbeck from Kewanee, and Regina Leffelman from Lostant.  Completing our group were Wayne Leader, 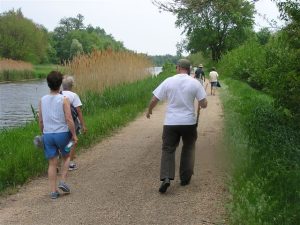 Phil St John, Janice Dzierzynski, Gene Smania, Sheila Yourek, and Ed Herrmann.  Temperature was at 89 as we started our hike.  A brisk breeze came up but it seemed the trees blocked most of it.  The hike was aptly named as the red winged blackbirds were nesting in the reeds along the bank. Next month they will be feasting on mulberries as they become ripe.  Our garbage bags were almost empty, the lush tall grass hid it all. 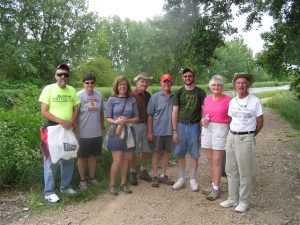 Follow the leader to Bridge 62, yes, that is the best way to find it.  We passed 5 county roads before arriving at our bridge.  No parking lot at this site.  New to our group today was Laura Sellett from Sterling.  Completing our group of eight were Wayne Leader, Kim Jalley, Carol Hubbs, Craig Arbet, Bill VanLue, Ron Obrecht, and Ed Herrmann.

We noted how well kept the local camp ground tended to their area along the canal. 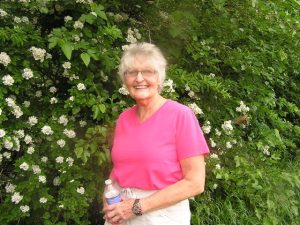 I could not recall hiking this area for a long time.  I was right, when this hike was scheduled in March 2010 our shuttle driver took us to the wrong location.  We crossed the Green River, Aqueduct #9 goes over it.

I snapped this pic of Carol with the wild roses in the background.  This was before we all got wet by a rain storm.

Clouds today provided some relief from the recent heat wave.  New to our hiking group were Jan Wyffels and Patti Sears from Atkinson, Jim and Twila Robinson from Silvis, and Bill and Ginny Green from Princeton. Wayne Leader, Craig Arbet, Bill VanLue, Ron Obrecht, John Elston, and Ed Herrmann completed our group. Quite a few others were out today.  We met a lot of people on bikes, several others paddling 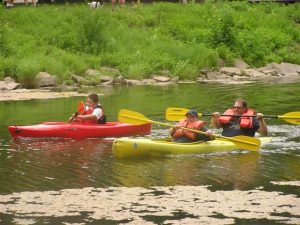 kayaks, some just walking, and a few were fishing at Lock 24 and also across at the Ikes.  The lotus lilies were in full bloom.  Twila Robinson said she planned a return trip later this week to show off the area with her grandchildren. 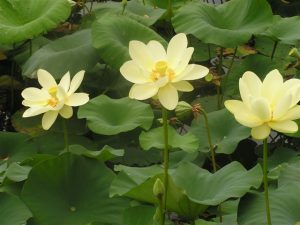 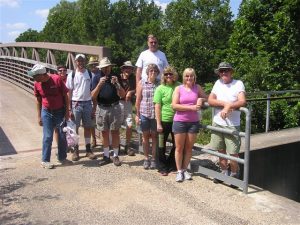 It is an uphill hike today!  Only 3.2 miles but a large drop in elevation on the Hennepin Canal.  We viewed 7 locks along the way.  New to our group today were: Mike Imel, from Sterling; Gretchen Hickman and Angela Burford, Galva; Cherri Dolieslager, Kewanee; David Gerke, Kewanee.  Wayne Leader, Bill VanLue, Ron Obrecht, Richards Rahn, Craig Arbet, Kim Jalley, and Ed Herrmann completed our group.  A section of today’s hike is over a shared section with equestrians. 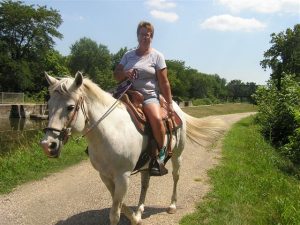 We met two today.   It is a courtesy when encountering someone on horseback to step aside and avoid any sudden movements that might spook a horse. 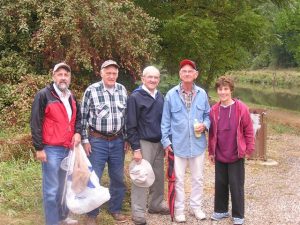 Scattered showers passed through the area this afternoon but no precipitation at the start of our hike.  Equipped with rain gear today were Wayne Leader, Richard Rahn, Bill VanLue, Janice Dzierzynski, and Ed Herrmann.   Rain started before we reached our first mile at bridge 51.  Recently the brush cutter was busy clearing the sides of the trail.  Usually we don’t expect to find much garbage in the remote areas, today was the exception. 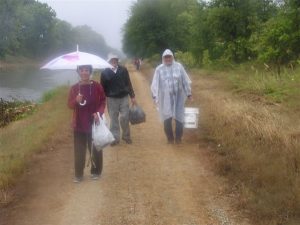 Our bags got full as the cans and bottles along the trail were easy to spot.  As it was, the steady rain ceased just before we reached the parking lot and the end of our hike! 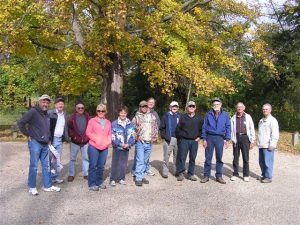 Great weather today for our 12 hikers.  New to our group were Alice Mueller and Scott Stanke from Spring Valley, David Nowakowaski from Dalzell, and Bill Hein from Mendota.  Completing our crew were Wayne Leader, Ron Obrecht, Bill VanLue, Janice Dzierzynski, Phil St. John, John Elston, Gene Smania, and Ed Herrmann.  We didn’t see a lot of cyclists on the trail today.  Quite a few bikers in the area during the week days, they must be watching football on TV today.

The same must be true for the fishermen as we see many of them sharing my favorite crappie spots in the past few weeks.  Besides taking in the fall scenery many of us noticed the blue herons, flocks of white pelicans floating high above, and a snake sunning on the path that I almost stepped on. By taking advantage of our hike today, most were introduced to a hard-to-find section of the Hennepin Canal. 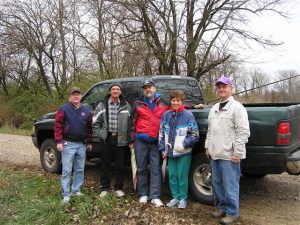 Stormy Weather!  I was advised to cancel today’s hike and I agreed.  I decided to check to see if anyone would come out today for a hike.  The severe storm for this area had passed an hour before and except for the strong winds the rain had stopped.  Wayne Leader, John Elston, Phil St. John, Janice Dzierzynski, and myself had driven to Sheffield today.

The group agreed to a shortened hike.  Three dead trees had come down on the trail.  The impact had broken them apart and we were able to clear the path.  Bucking that strong wind took a lot out of you.  I was glad that the hike was shortened, scattered showers followed us home.